If you’ve been involved in an accident that involved a speeding driver, you need support from a speeding accident lawyer in Dublin, GA. The Weinstein Firm’s Dublin accident lawyers can help you to recover damages and collect the money that you’re owed. Contact us today to find out more about what we can do to help you.

How Does Speeding Increase Chances Of Causing An Accident?

When people drive at higher speeds, they have less time to process information and react to what’s happening around them. Furthermore, braking distance increases when driving at a higher speed. Because of these factors, speeding significantly increases the risk for accidents. In addition, it elevates the risk of a severe injury.

There are many factors considered when a speed limit is set, including the road type and condition, traffic volume, and crash history on the road. Going beyond those limits can put drivers, passengers, and anyone else on the road at risk. It’s estimated that speeding is a factor in one-third of all accident fatalities.

Driving even a few miles over the speed limit can have dangerous consequences. It can also be risky to drive at normal speeds in bad weather conditions. It’s the responsibility of all drivers to pay attention to posted speed limits and driving conditions when they are on the road. 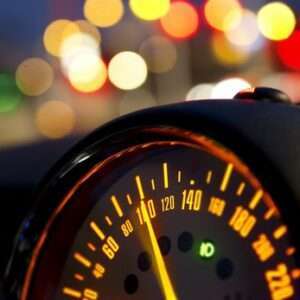 How Can I Prove That The Other Motorist Was Speeding When They Hit Me?

After an accident, a driver may claim that they weren’t speeding and that they are not to blame for the accident. Thankfully, there are a number of ways to collects evidence and establish that the at-fault driver was traveling at an unsafe speed.

Modern vehicles are equipped with onboard devices that record information while the vehicle is being operated. In Georgia, it is legal to download this data and use it to establish driving speed, even if the at-fault driver does not give you permission. This is one of the easiest ways to establish that a motorist was driving above the speed limit.

In 2015, the Georgia Court of Appeals declared that testimony on speed based on the experience of impact was inadmissible in court.  However, witnesses that were at the scene of the crash can still give testimony to support that the at-fault driver was speeding.

In some cases, it may be possible to use GPS data to establish that a driver was speeding. Although GPS devices do not collect information about vehicle speeds, a GPS logger can show that a driver could have not traveled between two locations without going above the speed limit.

If you were involved in an accident that was caused by a speeding driver, The Weinstein Firm can build a strong case on your behalf. We’ll work to collect evidence that shows that the driver was traveling at an unsafe speed, which will lead to a win for you.

How Long Do I Have To Make A Speeding Car Accident Claim In Georgia?

Why Do I Need A Speeding Accident Lawyer?

Hiring a speeding accident lawyer in Dublin, GA is the best way to ensure that your claim has a favorable outcome. An attorney can prove liability, negotiate with insurance companies, and determine the true value of the injuries that you’ve sustained. A lawyer can also gather evidence and consult with experts to build the strongest possible case for you.

It’s vital to have the assistance of someone that understands Georgia car accident laws and knows how to prepare a settlement demand letter. Without an attorney, you could receive far less than the true value of your claim, and your claim could even be denied entirely.

How Much Will a Speeding Accident Lawyer Cost?

You may be reluctant to hire an attorney because of the potential cost. If you’re dealing with medical bills and other expenses, you may be concerned that you don’t have room in your budget for legal fees. Thankfully, you don’t have to pay any money upfront when you work with The Weinstein Firm.

We work on contingency, which means we won’t get paid unless you do. Instead, we’ll collect a percentage of the settlement that you’re awarded. If we’re unable to secure a settlement for you, you won’t owe us a thing.

While the total compensation for your claim will vary based on the circumstances of your accident, we’ll work to recover the maximum amount for you. In Georgia, it’s possible to collect economic damages, non-economic damages, and punitive damages.

Since you won’t pay anything unless we win, there’s no reason not to seek the support of one of our attorneys. Don’t take the risk of filing a claim on your own. Instead, put your claim in the capable hands of The Weinstein Firm. You can trust our firm to support you during this difficult time.

If you’ve been injured in an accident, and speed was a factor, you need the help of an experienced speeding accident lawyer in Dublin, GA. The Weinstein Firm can build a strong case for you so that you can collect the compensation that you deserve.

Being involved in a car accident can be devastating, which is why it’s so important to have the support of an expert attorney during this difficult time. Schedule a free consultation with The Weinstein Firm today so that we can review your case and start fighting for you.